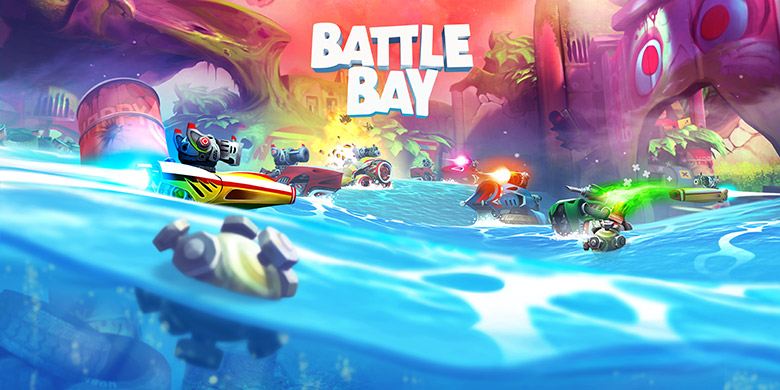 Rovio, the creator of the famous Angry Birds, is thrilled to present a new real-time five versus five (5vs5) multiplayer game - available now on iOS and Android worldwide. Developed internally by Rovio, Battle Bay is the latest gem in Rovio’s stellar games portfolio.

The seas have risen, and the characters of Battle Bay are fighting for survival. Players must assemble in teams of five to challenge opposing teams in a last-boat-floating, real-time multiplayer showdown. With the opportunity to customize ships and train their crew, players can make their ship their own, while chatting with other team members using an in-game communication system.

Battle Bay marks a lot of firsts for Rovio, being its first real-time competitive multiplayer game, its first game entirely in 3D third person perspective, and the first time showing the Battle Bay IP with its beautiful world and mysterious characters.

“We are excited to announce Battle Bay, Rovio´s brand-new IP, that is a result of years of efforts from our fantastic team,” noted Wilhelm Taht, Executive Vice President of Games at Rovio Entertainment. “We are proud to offer this level of multiplayer, action packed gaming experience to a wide range of gamers globally. “Taht continues.

Tuomo Lehtinen, Product Lead for Battle Bay adds “With Battle Bay we really wanted to build something completely new and different from the games Rovio is typically known for. It was important to build a fresh and unique experience with enough depth to be played for years. “

Note to editors:
• Real-time multiplayer in the palm of your hand
• Form guilds and battle real players in 5vs5 team based battles
• Fleet up with a friend and destroy the enemy
• Five unique ship classes and ten crew members to fit different play styles
• Over 30 different items for players to collect, upgrade and master
• Acquire new weapons and items for ship upgrades
• Chat with your friends and guild mates to plan winning strategies

Angry Birds land at Netflix in a new animated series

Red and Duo team up in an Angry Birds x Duolingo crossover.

Everton stars Bring The Anger for a good cause!

The Angry Birds Movie 2 is now available for digital download!

Introducing Sugar Blast! – a fresh (and fruity, and chocolatey) slice of tap-to-match gameplay

END_OF_DOCUMENT_TOKEN_TO_BE_REPLACED

Originally published by Netflix at: https://media.netflix.com/en/press-releases/angry-birds-land-at-netflix-... Netflix and CAKE in partnership with... END_OF_DOCUMENT_TOKEN_TO_BE_REPLACED

Duolingo’s mascot, Duo, has a reputation for getting a bit persistent to encourage Duolingo users to keep up with their lessons. Nothing gets Duo’s... END_OF_DOCUMENT_TOKEN_TO_BE_REPLACED

The Angry Birds’ 10th anniversary was all about bringing the anger – channeling anger and using it for a good cause. Everton stars Dominic Calvert-... END_OF_DOCUMENT_TOKEN_TO_BE_REPLACED

Comments from CEO, Kati Levoranta Rovio’s group revenue in the fourth quarter of 2019 was EUR 71.6 (72.7) million which was -1.4% lower year-on-year... END_OF_DOCUMENT_TOKEN_TO_BE_REPLACED

Click here for all the news that's fit to fly - delivered straight to your inbox! You can opt out anytime.